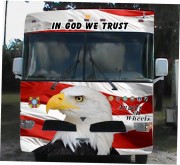 Some think that the Founder of the Mission in Citrus is going to the extreme. Maybe.But something unusual , and out of the box has to happen to wake up Washington pretty soon. Our Veterans are remaining homeless and in need. Their voice needs to be heard and acted upon. They served their country with honor. And homelessness is not an acceptable reward for any Veteran. America must make Congress do what is acceptable and good for those who protect us each day.Support Rolling Thunder on May 29th.

Crystal River, Florida, February 26, 2016 (Newswire.com) - ​​​​Veteran's Homelessness was supposed to be end, by December of 2015, but those in the trenches knew it would be impossible. So why did they make the vow ? To make voters happy before elections. Thinking that they could wave a wand. Wizard of OZ scenario. Rabbit out of a hat.Faith,common sense, and a realistic plan would have produced better results. The effort was not even worth applauding. Reports say there was a significant decrease in Veterans homelessness. Not in the Mission in Citrus neck of the woods.It is worse than they have seen in eight years. And it is just plain simple.Not right.Never will be. Our Veterans are the reason they can sit in the White House safely. They are the reason we have Freedom.They served us and it is inexcusable behavior not to take care of them.

The Mission in Citrus Veteran's are moving into homes again, thanks to the United Way which many are thankful for..Go figure..No HUD -VASH Vouchers left. The VA out reach workers and Family Endeavors helped as much as they could with the resources that they were given. But there were less than 800 HUD-VASH Vouchers allocated for the entire State of Florida. Worse in many other States. The Mission in Citrus has a very simple way of doing things.Get a job or get your disability. Get a car, and then find a place to live.Then they help furnish the place and provide aftercare. And help them with all they need mentally, physically , while at the shelter.And if asked for.Spiritual help. But they do not force anyone, or make it a requirement. They fought for their freedoms.The Mission in Citrus does it all on a budget of less, than what members of Congress make in a year..And they do not push them to make a quick and uninformed decision. But little to no help, has been given from Washington. The Mission in Citrus system works.Many others do as well. But more resources are needed to continue a high level of success.

The Mission in Citrus does not have time limits for their stay. That is why so many fail.They need the time to get all the help they need, and it adds up to a very high success record. If Washington would just provide enough help.The Mission in Citrus and many others, could work their way through America and get the job done.Therefore the reason for the Mission in Citrus pilgrimage to the White House.Tired of the red tape and bureaucratic nonsense, that holds up those who are working to help reduce Veteran's homelessness.It will never end completely , as some Veterans do not want to be around people, and some days, who can rightly blame them. One of their Veterans can not start his POST 9/11 GI Bill CDL Class, because he was born in Germany while his parents were in our military. Numerous Congress members have been contacted with no results.They are now attempting with the Governor of Florida.Rick Scott.And everyone wonders why Veterans are always so upset.This is just one example of many that they face each and every day.See more at

The Mission in Citrus will be updating the public as they purchase a box truck, and get it wrapped for their voyage. It will be their support vehicle to the Rolling Thunder Rally, and the White House.The Mission in Citrus is now working on the mounds of paperwork and permits that they have to fill out and fees to pay. But they will be there.And they hope that many support them along the way.Huge two foot letters designed with a much larger vision for the future.A message to be seen around America, and by Congress and President Obama.Nothing else has been successful, in getting their attention.Their prayers are that this will.The Mission in Citrus would like to thank all of those who have been sending encouragement, prayers, and help. They ask God to bless them all.